This is a collection of articles about the law library's history. 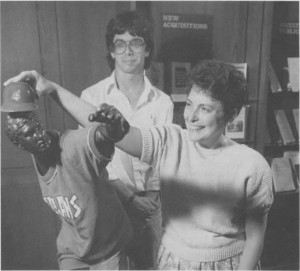 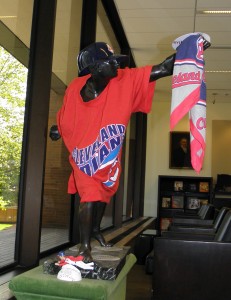 When you were last in the law library, did you notice-in the first-floor reading room next to the elevator-a Rodin-like sculpture of a young athlete, dressed in a T shirt? Did you think that the library staff had joined a campaign against nudity in sculpture? Or that we had become an outlet store for novelty T-shirts?

Don't worry. It was only the law library's mascot, affectionately known as Ernie.

Ernie came to the law school—the old law school, on Adelbert Road—in 1969 as a gift from the Banks­ Baldwin Publishing Company. When the school moved to Gund Hall, Ernie came along too. His first home was Dean Louis Tepfer's conference room. In 1983, after several building alterations, the law library adopted him.

Until that moment, if truth be told, the statue had been nameless. But once he was placed in the library foyer and given the job of welcoming our clientele, it was clear that he needed a name. We named him after (then) Dean Ernest Gellhorn.

Ernie immediately made himself indispensable as the harbinger of holidays and seasonal celebrations. He has posed as Cupid, as Baby New Year, and as a Halloween witch. He has had his sporting moments-for example, in a Cleveland Indians uni­form. He always adds to the festivity of graduation time by robing with the seniors and hoisting a champagne glass, and he has even been known to celebrate Mardi Gras.

Ernie has alter egos (probably less fun-loving fellows than he is) in sev­eral museums, including the Louvre and the Cleveland Museum of Art. Henry Hawley, curator of later Western art at the CMA, explains that the local piece (you can see it on the terrace outside gallery 24) is modeled after the original marble sculpture owned by the Louvre and known as The Borghese Warrior. That early Roman work was found in 1611, sold to the Borghese family, and later bought by Napoleon and moved to Paris. There it became so popular that art lovers eagerly bought copies for their collections—though the Victorian age modestly added fig leaves. The Cleveland Museums reproduction is a little larger than our Ernie and is attributed (somewhat dubiously, says Hawley) to Johann Balthasar Keller, a Swiss sculptor (1638-1702).

And what is the pedigree of our own Ernie? Despite our best research efforts, his past remains a mystery. And he's not telling.

The original version of this article, by Library Director Kathleen Carrick, was originally published in the September, 1989 issue of In Brief, a publication for alumni of the Case Western Reserve University School of Law.